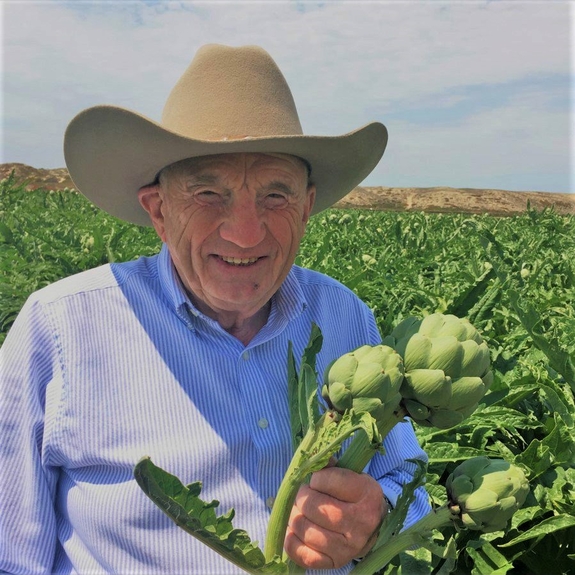 Sherwood Darington (age 83) is a native of the Salinas Valley and a member of the pioneering Sherwood family. He and his family have been committed to public service in Monterey County for many generations.

His great-grandfather on his mother’s side, Eugene Sherwood, was one of the men who drew the original map for the City of Salinas in 1868. Knighted by Queen Victoria for his service in the Crimean War, Eugene Sherwood originally purchased two rancho land grants in the Salinas Valley to run sheep. Realizing the importance of the railroad to getting the agricultural products to market, Eugene Sherwood offered Southern Pacific Railroad free acreage for the right-of-way and a depot, which opened its doors for business in 1872. That was also the year that “Salinas City” became the seat of Monterey County. Eugene Sherwood was instrumental in having the seat of Monterey County move to Salinas by entering into an agreement with people east of the Gabilan mountains to divide the original Monterey County into two counties, Monterey and San Benito. The “Sherwood” legacy is preserved today by the many places that carry the family name. The family is best known for its historic donation of the Salinas Rodeo grounds/community center/aquatics center and the Gabilan Wilderness properties to the City of Salinas.

Sherwood Darington graduated from Salinas High School. After graduating from California Polytechnic University, San Luis Obispo, with a dual major in agriculture, Sherwood worked with Joe Wing before being drafted into the Army. When he finished his tour of duty, he returned to Salinas and went to work as a field man purchasing fresh vegetables throughout California for a freezer company. Sherwood’s later employment was with Bank of America as an appraiser specializing in the agricultural sector. He served in a variety of capacities with Bank of America and retired after over three decades as a Vice-President of appraisal services for the Agricultural Lending of the central coast.

Sherwood is the founder, Board Member and President of The Appraisers Research Foundation. The foundation provides grants to both national and international universities, professors, and individual appraisers for the advancement of the appraisal profession. He served as the chairperson of the of the national ethics committee of the Society of Real Estate Appraisers and held the professional designations of SRA, SRPA, SREA and MAI. He was selected as the only person west of the Mississippi River to serve on the original Appraisal Standards Board of the Appraisal Foundation, Washington D.C. The Appraisal Standards Board was recognized by the U.S. Congress to develop, interpret and promulgate appraisal standards for the appraisal profession throughout the United States. He currently serves as the public member of LAFCO of Monterey County. Sherwood has served on the Resource Conservation District of Monterey County and as the alternate member of the Monterey County Assessment Appeals Board.

Sherwood is one of the co-founders and original board members of the Ag Land Trust of Monterey County. Formed in 1984, the Ag Land Trust was created expressly to help farmers, ranchers, landowners, and local governments to permanently preserve and protect the county’s prime and productive farmlands and ranchlands of the Salinas Valley from the urban sprawl that eliminated many of California’s most productive agricultural areas.

For many years, Sherwood Darington has served and currently serves as the Executive Director of the Ag Land Trust, which is now recognized as the most successful agricultural land conservancy in California in preserving prime farmland by encouraging city growth towards less desirable and productive farmland. Under Sherwood’s leadership, the Ag Land Trust has permanently preserved over 30,000 acres of agricultural lands in Monterey County. The Trust and Mr. Darington continue to work diligently to protect and preserve the agricultural heritage and resources of the Salinas Valley for future generations.

The Ag Land Trust Featured at KSBW’s Share Your Holiday